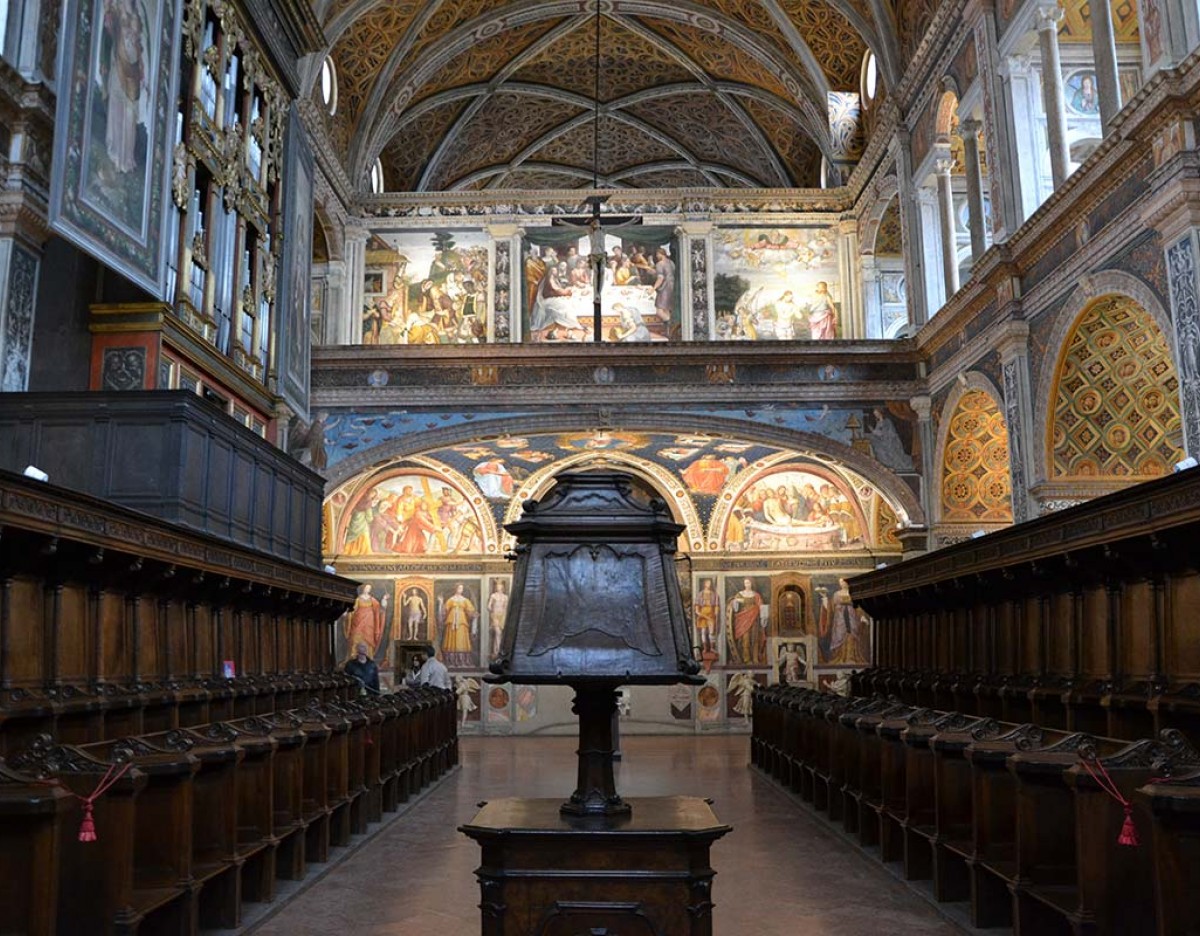 In unicorns we believe!

Unicorns really do exist, and in Milan there is proof. Don't you believe it? In the Church of San Maurizio al Monastero there is a fresco depicting Noah's ark and, among the painted animals, there is also a pair of unicorns. Defined by many as the "Sistine Chapel of Milan", the Church of San Maurizio remains off the usual itineraries and often happens to visit it almost by accident. Instead it has walls with many paintings and precious stuccoes. 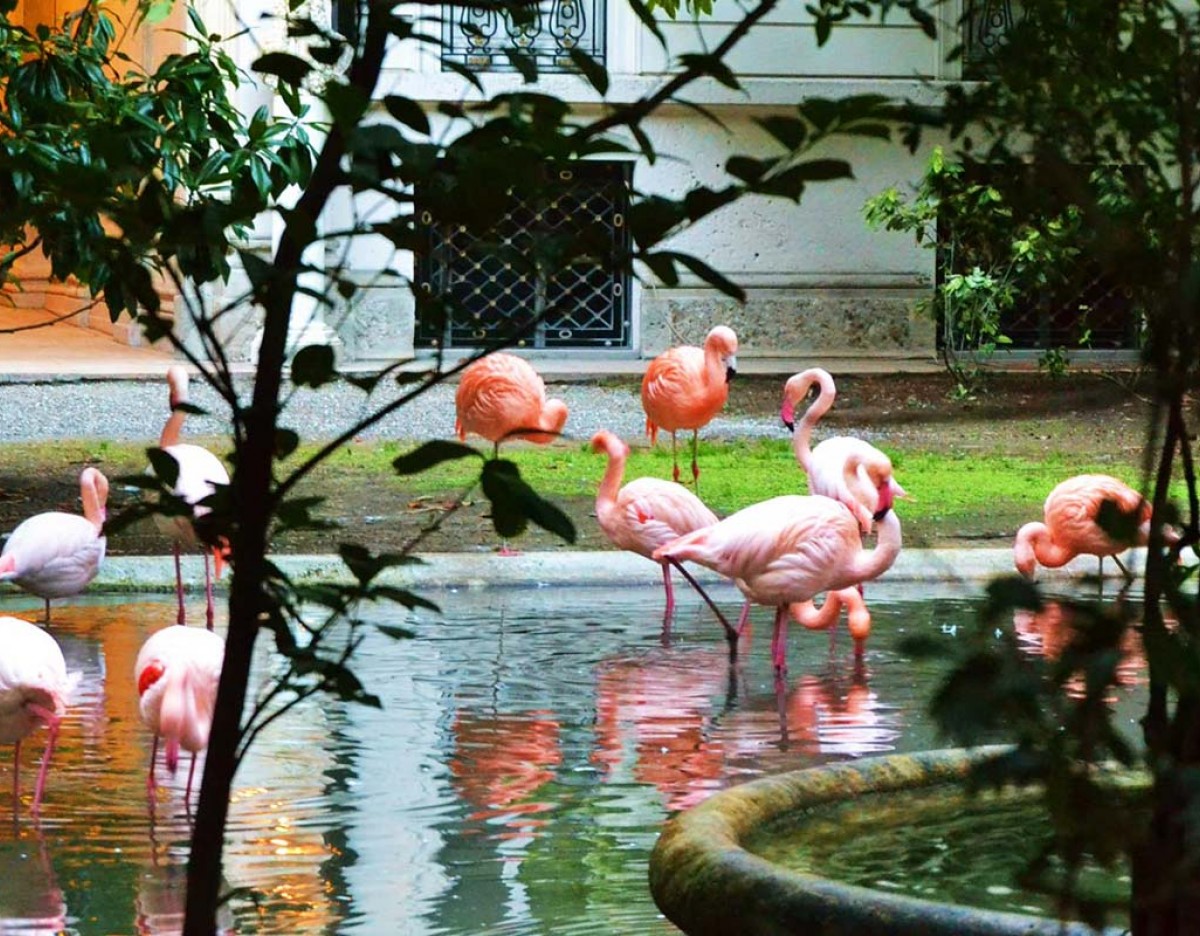 From unicorns to flamingos: Invernizzi house

Let's leave the unicorns of the paintings to approach the more realistic - but always fascinating - pink flamingos! At Casa Invernizzi, near Porta Venezia, you can see several of them, from the gates of the historic villa in the heart of Milan. Here they have lived undisturbed for about fifty years and you can observe them at a fairly close distance, while they bathe in the villa's pond or doze in the shade of the trees in the garden. The villa is owned by the Invernizzi Foundation and cannot be visited, but the flamingos are very visible! 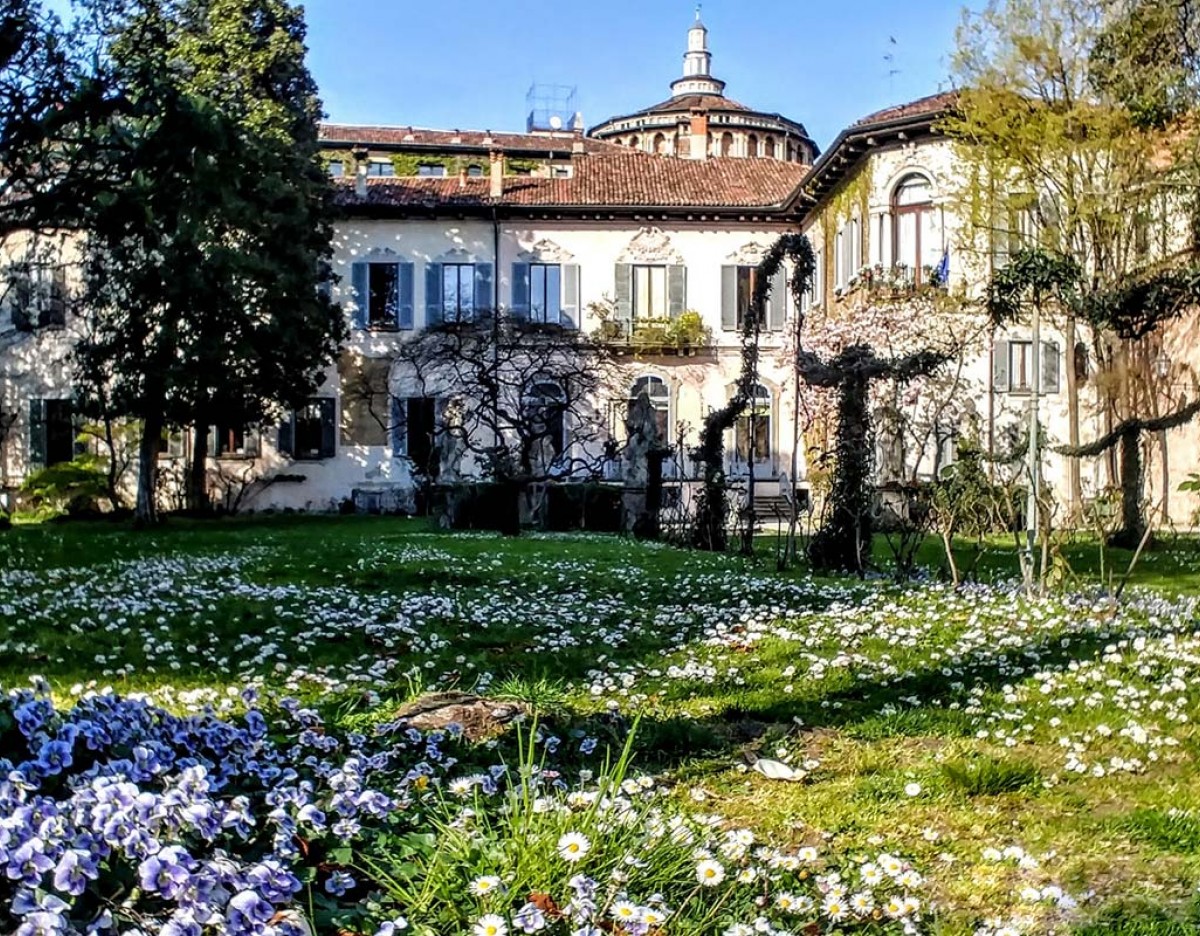 The vineyard of Leonardo

If you find yourself visiting Santa Maria delle Grazie with its refectory, which houses Leonardo's famous fresco depicting the Last Supper (the Cenacolo), also pass by Casa degli Atellani. Behind this elegant 15th century residence, there is one of the wonders of secret Milan: the vineyard that Leonardo received as a gift from Ludovico il Moro. This place was so dear to the artist that Leonardo even mentioned it in his will. Recently, Leonardo's Vineyard has been restored to its former glory and is without a doubt a must-see for all fans of Leonardo's genius. 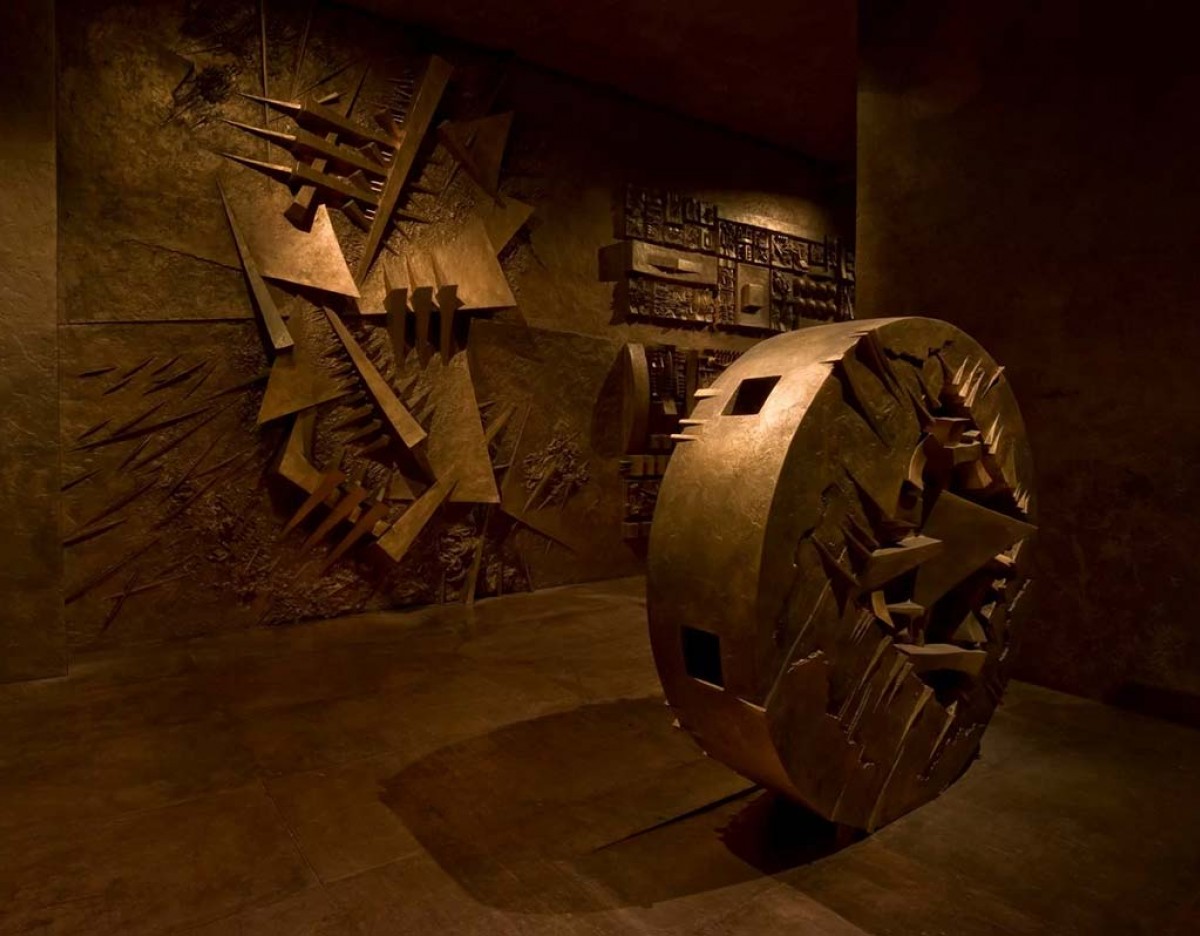 The underground labyrinth of Tomato

Even before escape rooms existed, Milan already boasted a signature labyrinth. In the basement of the former Riva-Calzoni building in via Solari 35, Pomodoro's Labyrinth is one of the most secret and fascinating places in Milan. 170 square meters of interconnected rooms in which to get lost and find yourself. Inspired by the Epic of Gilgamesh, the first epic poem in history. The place can be visited upon reservation. 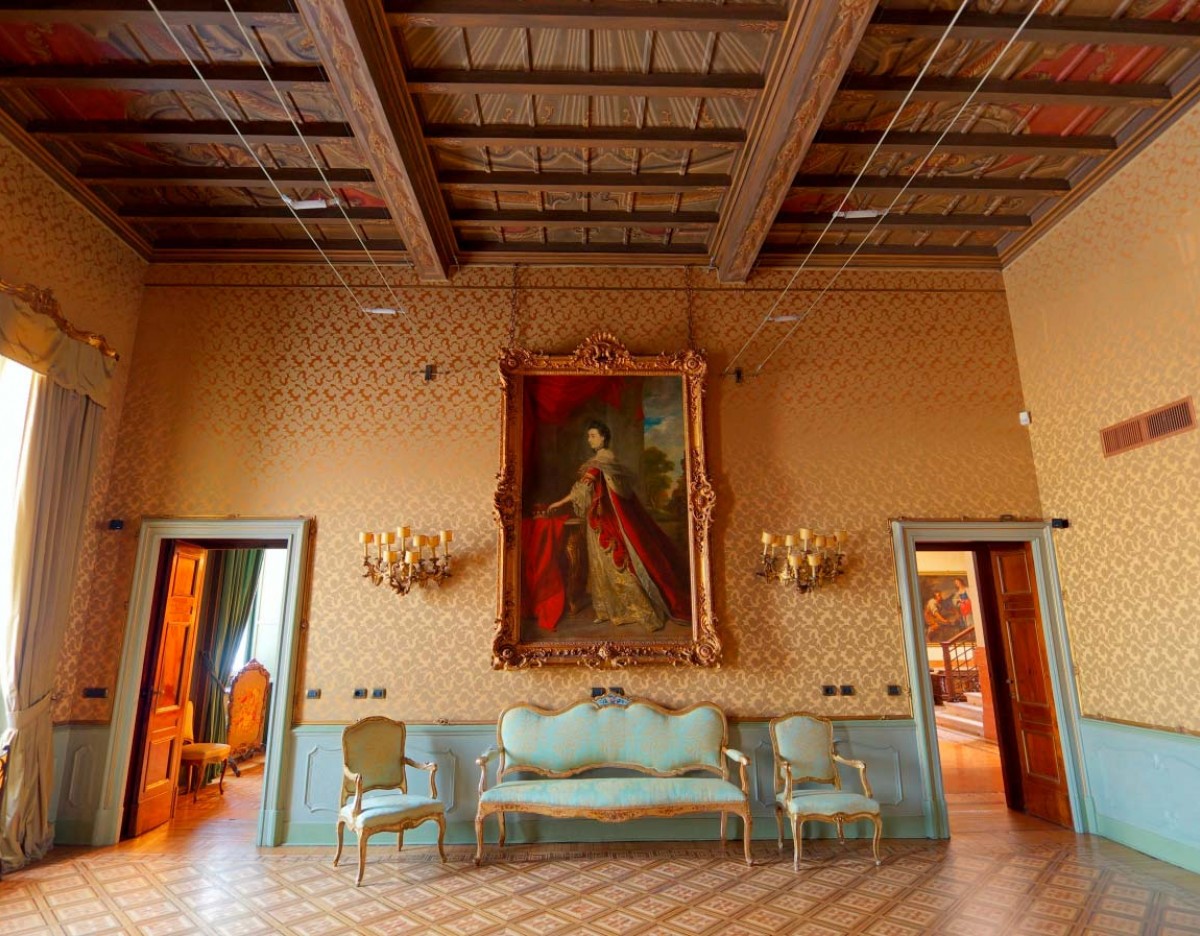 Among the jewels of Milan to be discovered there is also this historic residence, built at the beginning of the twentieth century on commission of an Austrian prince. The architecture of Milan contains several Art Nouveau villas, but this is one of those most worthy of a visit, because of the sumptuousness, which make it unique in its kind, and thanks to the perfect state of preservation, which allows visitors to imagine how it must have been the noble life of over a century ago. Let yourself be enchanted by the sumptuous halls, embellished with fine furnishings and elegance that still remains unchanged thanks to the stucco, woodwork and beautiful parquet floors. Overlook the inner garden, which houses the servants' quarters and stables. 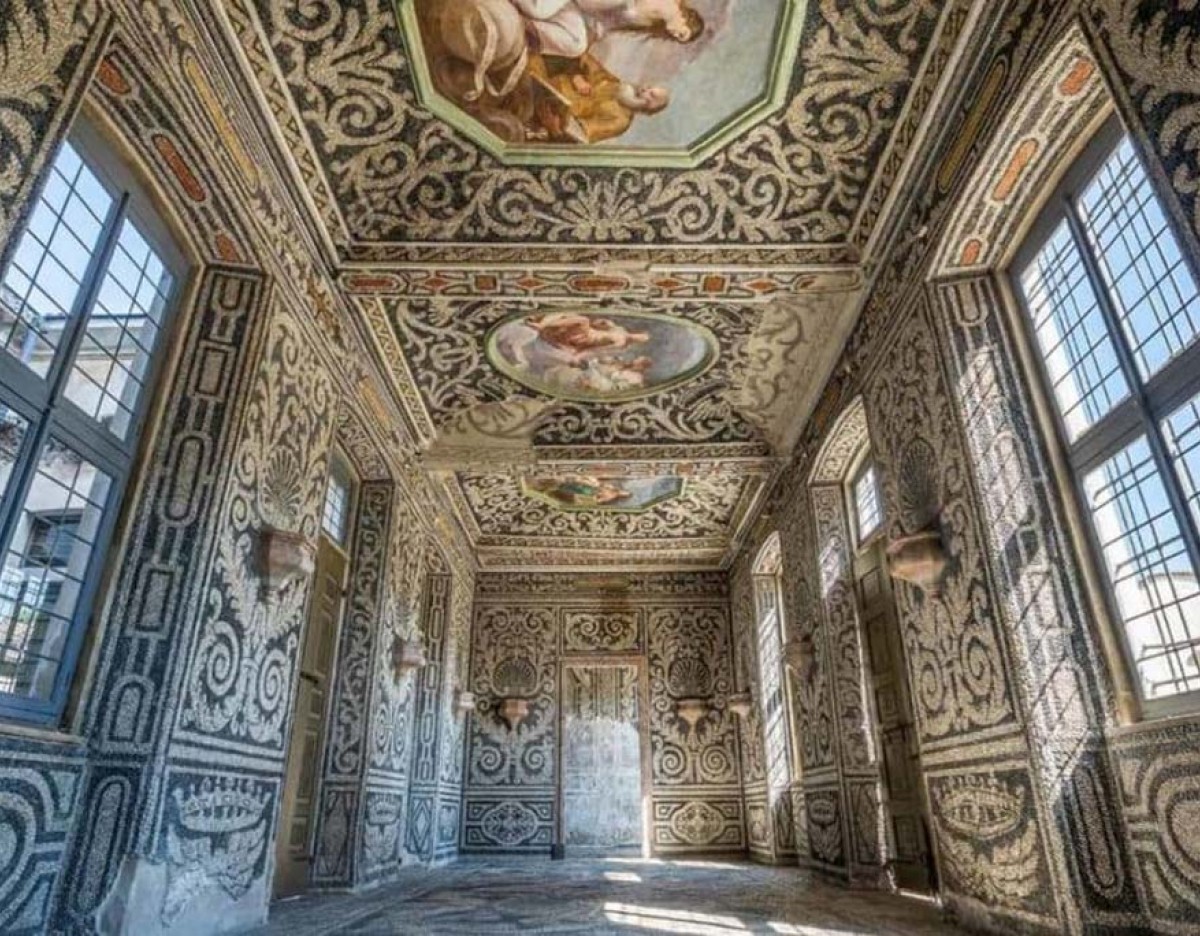 A camel in Milan. Borromeo Palace

Arriving in Piazza Borromeo you will find the homonymous palace of the Tuscan family. Looking at the entrance door, you will notice something strange for a city like Milan: in fact, a camel in a basket is depicted in the decoration on the spire of the arch above the door. But what is a camel with an ostrich crown and plume and feathers doing in Milan? It is part of the Borromeo family coat of arms, and symbolizes obedience, patience and loyalty. Camel aside, in the palace you will find the art collection of the Borromeos and one of the most elegant private courtyards of Milan; on the court of honor, which has porticoes on three sides and inside the palace, you will find scenes of courtly life depicted: the frescoes of the "Borromeo Games", dating back to about 1450. 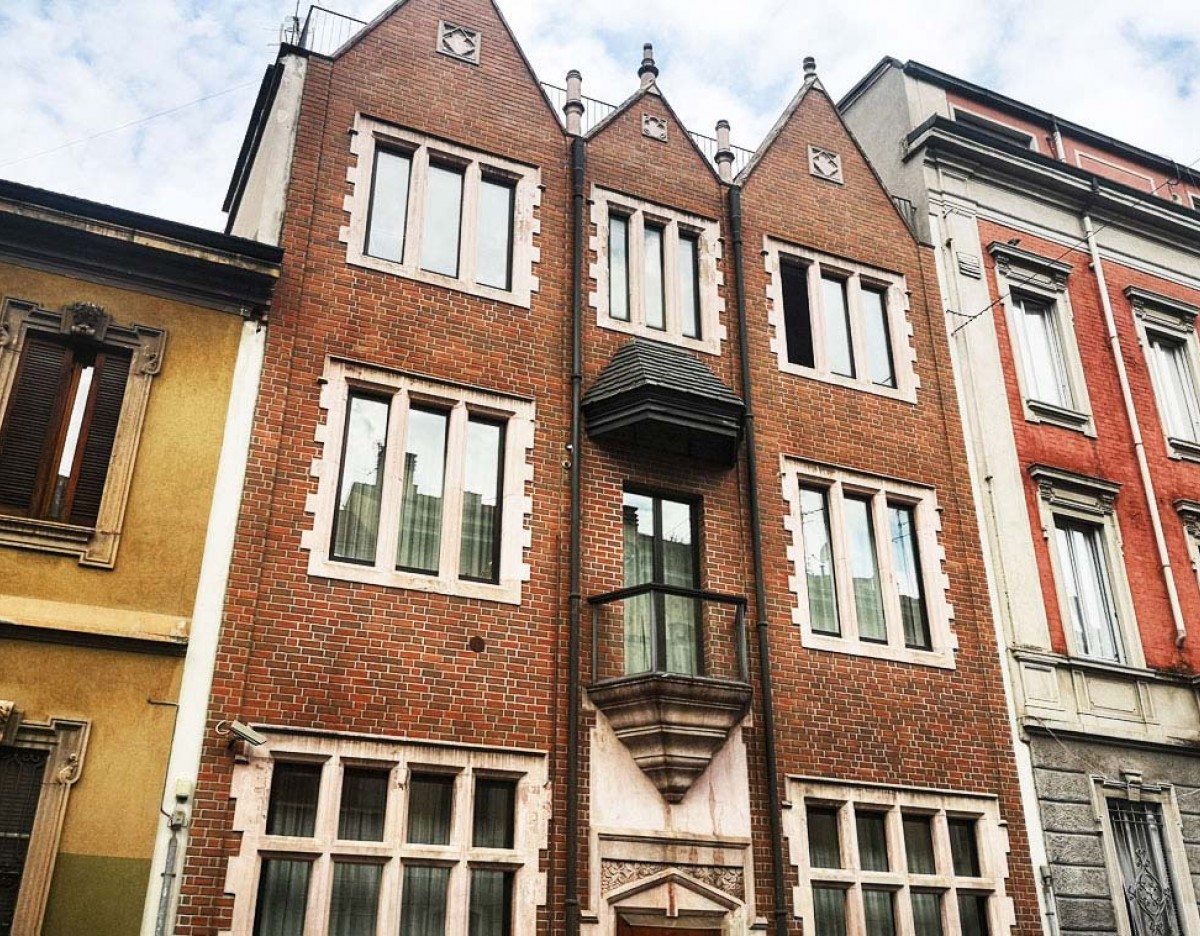 There are only 16 copies in the world and the only one in Europe is located in Milan. But what is it all about? If you pass in front of number 35 of via Poerio, near Porta Venezia, you will feel like you are in the streets of Amsterdam: here stands out the Casa 770 or Casa del Rabbino. Obviously Dutch, it is one of the 16 replicas of the house of Rabbi Yoseph Yitzchok Schneerson, fleeing from Nazi Germany, who had an identical house built in New York, at East Parkway 770 (hence the name). Over time, the New York home became almost a place of worship and a symbol for the Jewish community, so as to be replicated around the world, even arriving in Milan. Other copies identical to this one can be found in the United States, Argentina, Australia, Israel, Canada and Brazil. 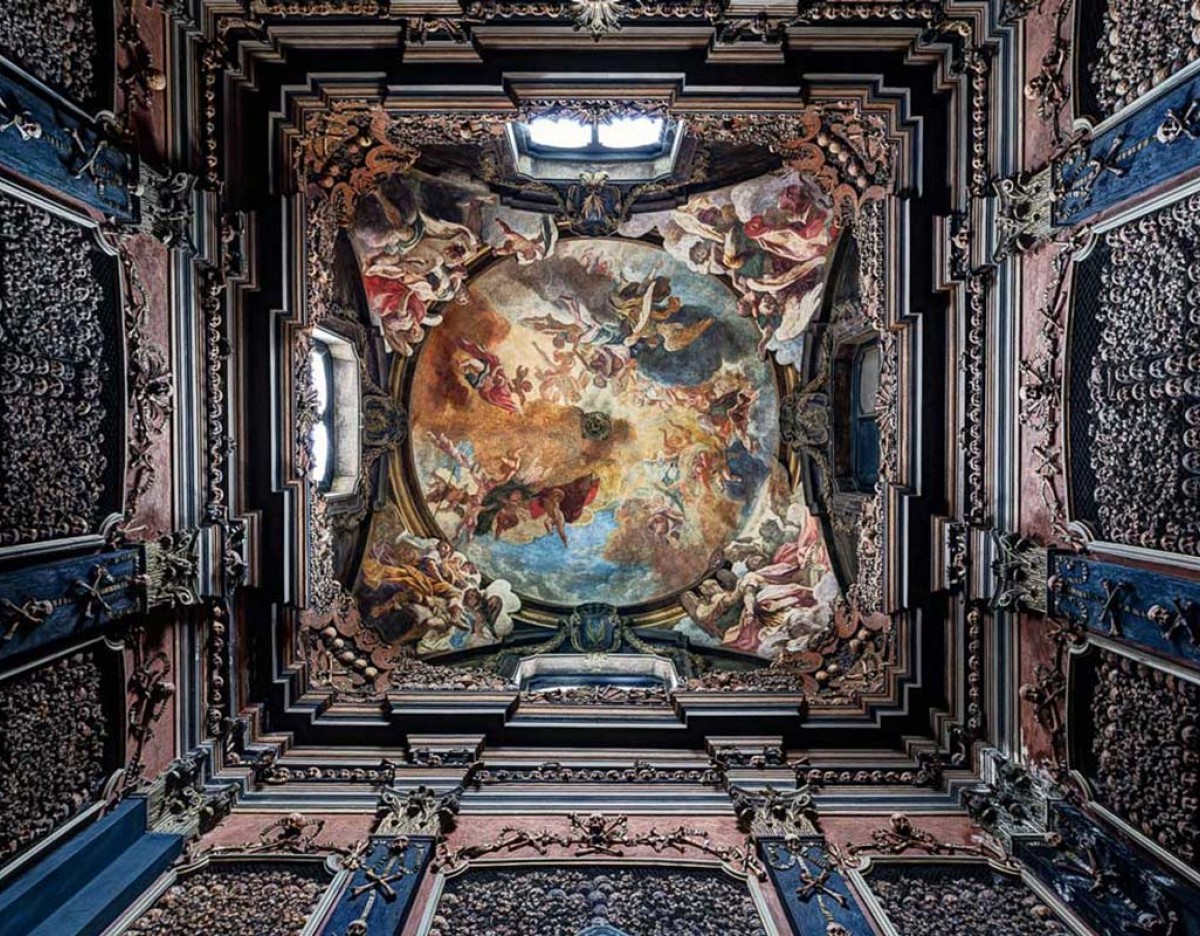 A church like this, we are sure you have never seen. If you are not afraid of bones and skulls (as the name of the site already suggests) this church is worth a visit (or at least a look). This is one of the most surprising and at the same time disturbing places in Milan The walls of this chapel are totally covered with real human skulls and bones, which here go to depict gloomy and rich ornaments and decorate it completely. The view is impressive, and it seems to be inside some spooky and macabre house of horrors, with the difference that it's all real... Certainly a place not for the faint of heart, but if you have some courage it's worth a visit! 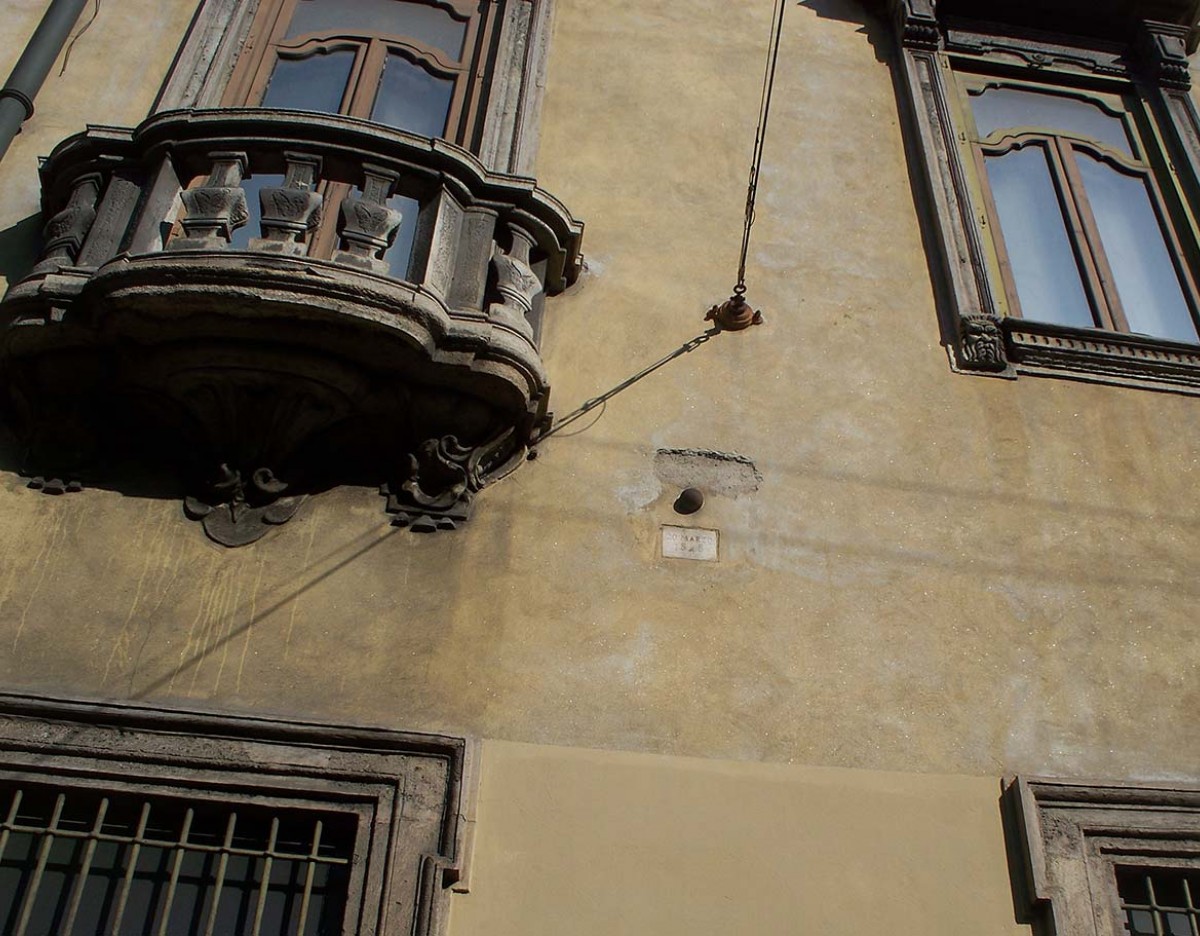 The times of wars always try to be forgotten, but often we forget that instead, these years can give new shape to the cities. For example, the revolts of the Milanese against the Austrians are still witnessed by the cannon ball that you will find stuck near Porta Romana, on Acerbi Palace, also called "Casa del Diavolo" (House of the Devil). Thrown during the five days of Milan in 1848, almost 200 years later, it did not do any damage, but it is still there, to remember an important historical moment for the city. Some cellars used as air-raid shelters date back to more recent times (Second World War). If you pay attention, walking around Milan, as in via Pace or in via Vasari, you will still find visible on the outside walls of the houses some arrows with the writing "US", which does not stand for "United States" but for "Uscite di Sicurezza". Among the places of the hidden Milan there are the Antiaircraft Shelter n.87 and the Shelter of Piazza Grandi, able to accommodate up to 400 civilians. 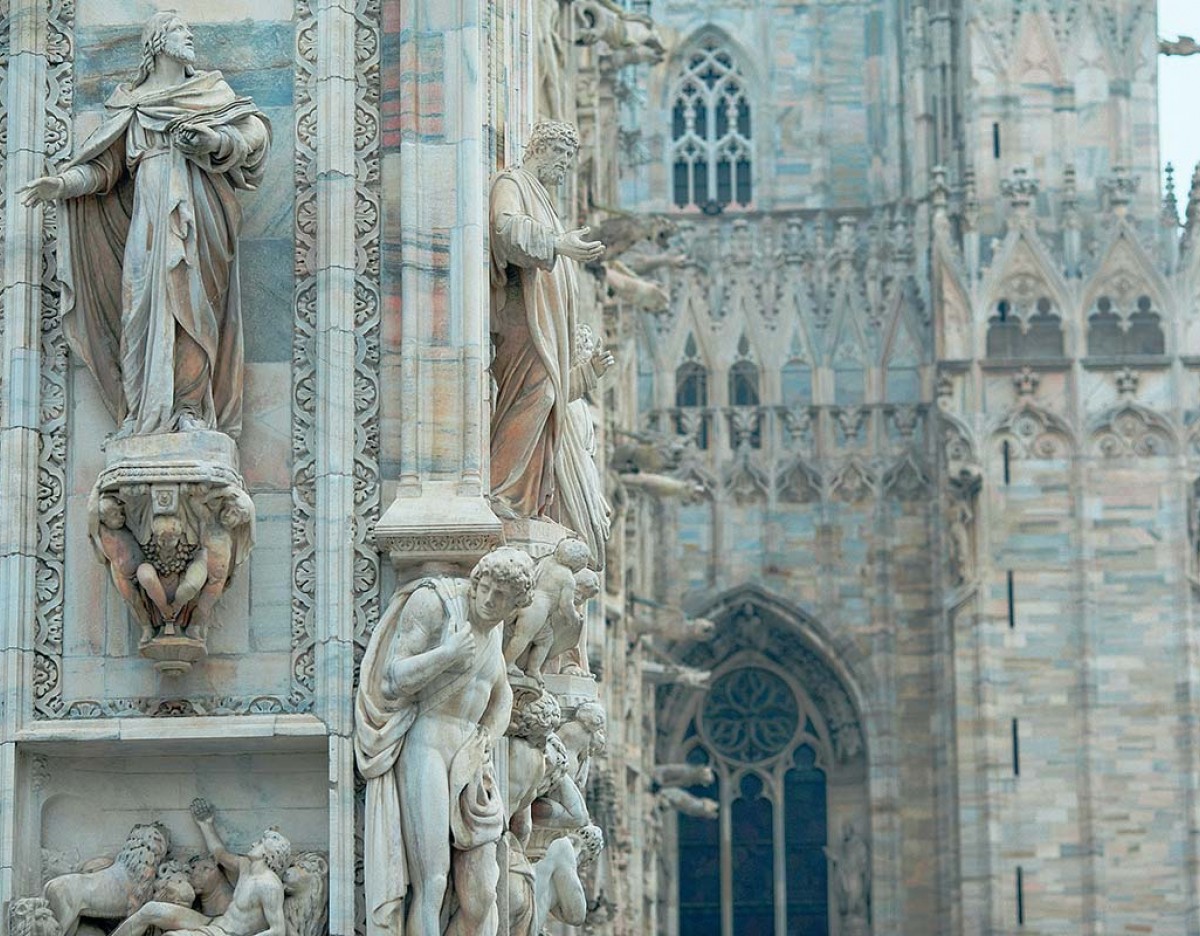 Secrets of the Duomo

All right: you're in Milan and you can't miss the obligatory stop at the Duomo? Then we will reveal some secrets that revolve around the Cathedral, so you can see it with 'different' eyes. Inside the Duomo there is in fact an ancient elevator dating back to 1600, which is activated only twice a year (on May 3rd and 6th) for the Rite of Nivola and preserves a Nail of the Crucifixion. Did you know, then, that above the Cathedral's central doorway is the statue that inspired New York's Statue of Liberty? Look up and see for yourself! Last but not least secret of the Cathedral: here there was a great episcopal complex, formed by the baptisteries of Santo Stefano and San Giovanni alle Fonti (where Saint Ambrose baptized Saint Augustine in 387 A.D.) and by the three basilicas vetus, minor, nova; these wonders were found during the maintenance works of the sewers in 1870 and during the construction of an air-raid shelter in 1943.

Choose your destination and stay with us